Main St.  Museum —  The main museum of county history is co-located with the Mary Miller Smiser Heritage Library in a two-level building. On the lower level are the Archives of Johnson County.  The street level floor is divided between library holdings and facilities and the museum proper. Currently on exhibit in the museum  are artifacts of early pioneer life in the county with lovely handmade local furniture.  Also included:  Letterwriting, Ladies Fashion and Housekeeping, Medicine and Health, Music, Schools and Pertle Springs.

1838 Courthouse is the site of the famous 1870 Old Drum trial. The ground floor reproduces the original courtroom, while the second floor houses numerous exhibits. Though the courthouse was not completed until 1842, the court had ordered its construction by 1838.  Made entirely of local materials, the foundation of sandstone, the handmade bricks and indigenous trees were all carefully constructed into the simple but lovely structure that was the seat of county business and justice from its completion to 1871, very soon after the trial of Old Drum.  A special exhibit on the second floor is dedicated to the events of the Civil War in Johnson County.  The Courthouse is also the site of special events, such as historic plays, exhibits, and the Eclectic Cafe Concert Series.

Elm School  is an early 20th Century one-room school from western Johnson County.  It  was moved to the Original Courthouse Square of Johnson County in 1996.  Lovingly restored, it has been a site for re-enactments of old school days, school tours, meetings and dinners.  Visitors are often affected as if by the Fountain of Youth.  Just entering the quaint old school revives memories of days in similar schools, mostly good, but some with “old school” punishment involving switches, rulers,  dunce caps and chalk circles. 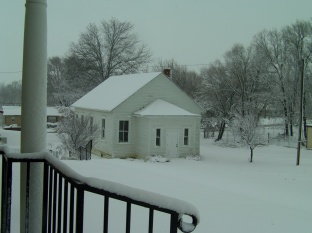 Culp Building—Since 2003, the JCHS has included functional space which houses the collections of Agricultural Implements, Mills,  exhibits of Homemaking in the  20th Century, and special exhibits such as New Harmonies. A special feature is an early lawnmower invented by Leonard Goodall.  The building can be used for a variety of events:  Dances, meetings, dinners, and once even a mouse race. 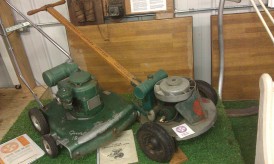